From CoTech
Jump to navigation Jump to search

We have two problems with governance that we would like to resolve:

- Lack of clarity regarding binding decisions

There have been several attempts to further our internal governance, notably Governance group at Sheffield 2019 gathering. We still lack a clear decision making process. We would like to link governance to the individual members within co-ops and tie it to financial contributions via fund.

Two proposals emerge: 1) Voting Membership of CoTech 2) Bringing a Proposal to a Vote

More details in the minutes

Proposal One - Voting Membership of CoTech

This proposal considers the importance of determining appropriate criteria for voting within CoTech. It puts forward a model of “Voting Shares” in order to provide a first attempt at facilitating binding decisions-making.

Democracy and decision making are two sides of the same coin. It is generally agreed that voting within co-operative organisations is a way to enable democratic participation; however the differences in scale and structure of CoTech’s member organisations makes it difficult to understand what voting inside CoTech could look like. In order to make binding decisions in a democratic manner criteria must be set out to determine how voting works within the organisation.

This proposal puts forward the model of “Voting Shares”. A Voting Share is held by an individul when ALL of the following are TRUE:

This encourages direct participation within the collective and utilises mechanisms and technologies that individuals will be familiar with from their own organisations.

One concern that members of CoTech may have is that larger member organisations may have disproportionate representation within CoTech; however this level of individual participation from members of these organisations would represent a deep organisational commitment to CoTech from these co-operatives. This would only be a good thing for democracy within CoTech as the benefits of a large number of individuals being so committed to CoTech currently outweigh the potential negatives which could be addressed in this event. It also stands true that to acquire more voting shares an increased financial contribution is required.

- Ratify the rule of "Voting Shares"

- If passed, the proposal will come into effect on the 28th of February 2020. Co-ops will be asked in the meantime whether they wish to be voting members.

Proposal Two - Bringing a Proposal to a Vote

This proposal considers the importance of creating a clear decision making pathway within CoTech. It proposes creating a lightweight two step pathway embodied by an iterative Proposal Loop followed by a binding Voting stage to ratify proposals. 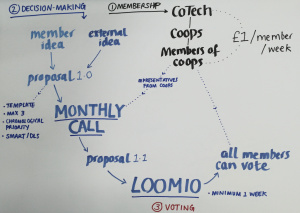 Democracy and decision making are two sides the same coin. Making decisions within CoTech should be done in a democratic manner that enables individual members to receive appropriate support in making and understanding individual decisions, as well as collectively ratifying those decisions.

1. The Proposal Loop step is an iterative process of refining a proposal so that it may be taken to Voting. Any individual member or group of members may put forward an idea to refine into a proposal and they may make use of any communication channel to do this e.g. sending out emails to interested parties, collaborating over forums, etc. Once the individual or group is happy that their idea has matured into a meaningful proposal that requires a binding decision they inform CoTech that they wish the proposal to be discussed at a Monthly Meeting call (which are held remotely). The task of Monthly Meeting (as it relates to the proposal) is to engage with the proposal and decide if it is mature enough to send to a vote, or whether it needs to be iterated further. A mature proposal will embody the SMART Principles.

2. Voting occurs using the Loomio platform. A vote on Loomio is created which links to the proposal details and members are informed via appropriate channels. A proposal is subject to the rules of the constitution. To pass -- a two thirds (67%) vote in favour of the proposal is required. Once a proposal has passed the Loomio poll becomes the documentation of the decision. Any actionable items outlined in the proposal should be assigned appropriately for implementation.

- Document this process in the CoTech wiki

- Produce and link to a lightweight, flexible, template to reduce the barrier to making a proposal (slightly)

- Three months after this proposal passes, a retrospective on the process held via the Monthly Call