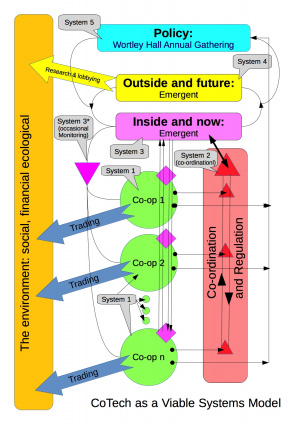 editable file available at File:CoTech as a Viable Systems Model.odg

The Viable Systems Model (VSM) was an approach to industrial management developed by Stafford Beer.

Its stated objectives are:

"It offers an alternative to the usual approach which depends upon hierarchy, authority and obedience, and is of particular interest to enterprises which are looking for ways of becoming more efficient and of encouraging participation and democratic work practices."

The VSM consists of five subsystems:

System 2 represents the information channels and bodies that allow the primary activities in System 1 to communicate between each other and which allow System 3 to monitor and co-ordinate the activities within System 1. Represents the scheduling function of shared resources to be used by System 1.

System 3 represents the structures and controls that are put into place to establish the rules, resources, rights and responsibilities of System 1 and to provide an interface with Systems 4/5. Represents the big picture view of the processes inside of System 1.

System 4 is made up of bodies that are responsible for looking outwards to the environment to monitor how the organization needs to adapt to remain viable.